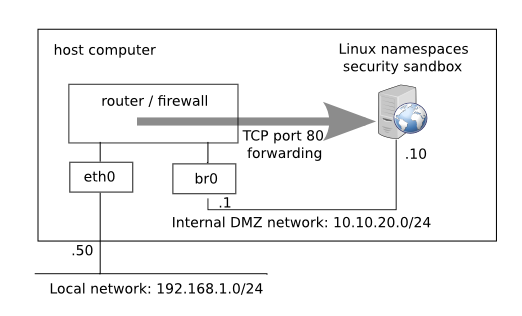 In this post i will show an example on how to pratically realize a more secure web browsing environment exploiting some great Linux kernel features to create sandboxed environments for browsers. If you don’t know what i’m talking about and you haven’t yet done it, read the first part!

After some tests and with the help of many friends from the Veteran Unix Admins group on facebook, the primary tool I’ve chosen to use is firejail.

Firejail is a great utility aiming to build sandboxes and it match almost perfectly our needs. With just a little bit of shell scripting, a little patch I have sent to firejail and a couple of other tools supported by firejail itself, we have all what is needed for our architecture.

As for the browser, we will use the worst one in terms of privacy, google chrome. Chrome has been chosen cause it’s the most hard to make works as expected at least between the most diffuse browsers, and is a very commonly used one.

The Linux distribution over this post is focused is Devuan GNU/Linux, if you don’t use it, shame on you, but the commands and scripts should works on every deb based distro like Ubuntu, Debian and others. If you are in the rpm world, you will have to adapt things for you, or better, you should switch to Devuan too.

As explained in the precedent post, we will have 3 different level of browser isolation:

As already said, we will use firejail, so, you need to install it. The already packaged version in Devuan is updates, so, if you use devuan, you can just do:

if you use another distro and your package manager show a version < of 0.9.42~rc2 you should compile and install it from the git upstream repository

I assume you already have a working Xorg, sudo and pulseaudio or working alsa config, chrome ( or the browser you will use ) installed.

3d accelleration should works too, but if you have issues with it, you can follow instruction in https://xpra.org/trac/wiki/Usage/OpenGL or try to use http://www.virtualgl.org/

Add 3 users to the system:

Maybe you noted we use standard /home directory for users, and maybe, like me, you don’t like it as they are mere “service” users. I agree, but sadly for how firejail works, for now, we must stick on that, as only it implement /home directory in a special way, and you should really stay in it to use it without issues.

If you use Devuan, debian, and probably also others, there is another limitation to take care about. Firejail doesn’t work so well with symlinks, and there are a couple of symlinks we need to get rid of. in Devuan, /dev/shm is a symlink to /run/shm. Same apply to /var/run, symlinked to /run.

A dirty but effective workaround is to put in /etc/rc.local the following lines:

Time to configure sudo. As we launch browsers on other users from our X session, we need to add permission to our user to launch it without using a password.

And then in the visudo editor put this line:

From now on i assume you are using google-chrome-unstable, of course change it with the browser you use.

The goals for this browser session are:

so, it offers limited protection, and it will be used only for trusted web sites. Also, it will share the same Xorg session with other apps, so, it will share resources and it cannot be considered really secure, just a little bit more than a common browser session.

edit the file /var/lib/firejail/anon-common.profile and put those line in:

those are rules applied to all of our browser sessions.

Then, create and edit /var/lib/firehail/chrome-trusted.profile and put those lines in:

Note the line “whitelist /var/run/pcscd/”. This is needed if you have a smart card reader you want to use with chrome for certificate based authentication.

then, time to write a script to launch our browser. Create and edit /usr/local/bin/chrome-trusted and put those lines in:

save it, and give it execution permissions:

then, you are ready to go. You now have a browser that have only limited access to filesystem ( /tmp,  /home/trusted/Download and /home/trusted/.config|.cache things in read write, other parts of the fs in read only, other parts aren’t visible at all ) and fully working with permanent configuration, running as fjtrusted user.

Note that if you launch many concurrent sessions of the chrome-trusted browser, they will end up to open a new tab on the existent browser, as it has access to the real singleton socket opened by chrome, so, they will end up in the same browser session. Take care to know it.

Goals for this level is to have a browser a little bit more secured than the trusted level, it will open different sessions if launched more time concurrently, it will NOT have persistent storage, and it can only save files in /tmp if you want to copy them in the “outside” system, if you download them in ~/Download, they will be discarded.

Also, this session will NOT have access to webcam.

It will, anyway, share the same X11 session with the rest of the system, and it will have access to the same networking as the rest. It has to be used with web sites you almost think are safe to browse, and it offer limited protection in case they aren’t.

Create and edit the file /var/lib/firejail/chrome-secure.profile and put those line in:

then create the launcher script /usr/local/bin/chrome-secure:

and give it execution permission:

Now you should create your template configuration, your browser will be restored to this config every time you launch it. To do that you should launch outside the sandbox for the first time:

As firejail will override the fjsecure user with a tmpfs, it cannot copy your “template” config from /home/secure, so, the solution is to bind mount it on another directory and make firejail copy from there.
Edit /etc/rc.local and put this line before the final exit 0:

and you are ready.

As the name suggest, this is the more paranoid configuration. This browser will be the most volatile, anonymous  and secure browser in your system. It will not have access to any part of the fs in write mode, and even in read more it will have very limited access.

It will not access to sound, mic or cam at all. It will access network only through tor, and it will run on a separate networking namespace.

Also, it will NOT share clipboard with the X11 session, as it will run on a completely separate session using xpra.

as usual, edit the profile for this session, by creating the file /var/lib/firejail/chrome-paranoid.profile, and put those line in it:

sometime chrome complain about not be able to sandbox it’s processes, you can both launch it with –no-sandbox ( it’s already sandboxed! ) or you can drop the line “seccomp.drop” in the profile and trust the chrome sandbox.

NOTE: this profile isn’t yet really complete, i will prepare soon a better one with also /etc override and other tricks!

now it time for the launcher: edit /usr/local/bin/chrome-paranoid:

then, you will have to create your configuration as done with the secure profile, so

here you will also have to configure a proxy for chrome to make it fully use tor. This isn’t needed to use it on normal internet web sites, but to make it resolve .onion internal address in tor, it must use a proxy.

And then you must configure tor too editing /etc/tor/torrc

then, add a line on /etc/modules:

to load the dummy module at boot, and in /etc/network/interfaces add this:

last pass, fix some configs at boot by add at rc.local those lines:

save it, apply by hands all the commands in /etc/rc.local or restart your system, and the first step is ready.

The configurations we have done are great, and you can already start to use a more secure browser environment, but they are not enough, and many other things can be done.

In the next post, the part 3, i will talk about add cgroups to limit cpu and memory used by the browsers, i will add traffic shaping to the receipt, and than i will start talking about using apparmor to make the whole thing more secure.

Hope i will find the time to write the next part soon!